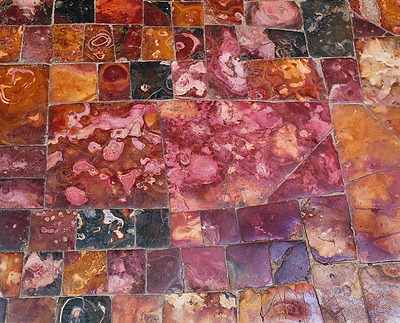 An object of interest in the cathedral is its extremely beautiful floor made of small-size blocks of flint with agate and jasper inclusions.

There is a documentary evidence that the floor had already been installed in the cathedral in the mid 17th century. The legend encountered in the literature of the 19thcentury states that the floor was laid out from blocks of agate-like jasper, which was once brought to Rostov Veliky from Byzantine and in the mid 16th transferred to Moscow on the orders of Ivan the Terrible.

The restoration of 2006-2010 in the southern gallery made it possible to uncover a ceramic floor dating back to the time of Ivan the Terrible. In the east part of the gallery, a fragment of the floor laid out from ceramic diamond-shaped two-colour blocks was reconstructed then.