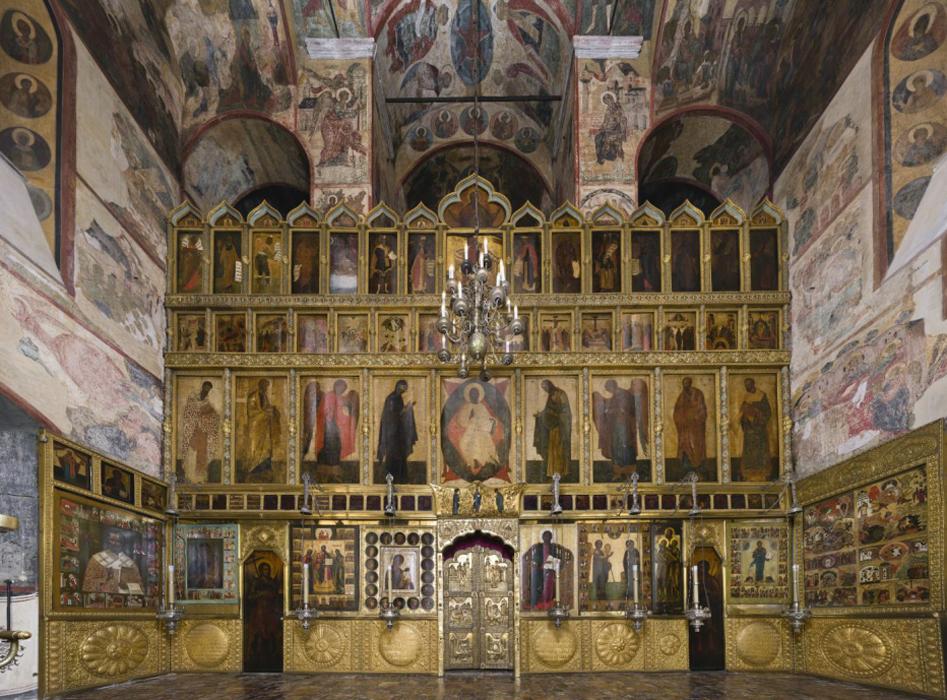 The high iconostasis of the cathedral is certainly the main adornment of its interior. It comprises parts made at different times. Silver gilt chased Holy Doors appeared in 1818, as the former ones were lost due to the invasion of the Napoleonic Army in Moscow and Kremlin. They were made out of dilapidated silver objects kept in the Annunciation Cathedral, as the sign on their edges says. The symbolism of the Holy Gates leading to the Altar premises, namely the Altar, the Diaconicon and the Prothesis, is related to their comparison with the border between the terrestrial and the heavenly worlds. It is reflected in all the Kremlin’s cathedrals, notwithstanding different materials, techniques and dates of execution.

The composition of the Royal Gates is traditional — the upper part of both flaps depicts the Annunciation, divided into two parts; depicted below are figures of the four evangelists with their own symbols. Their faces, hands and feet are made in a painted enamel technique, which has partly remained. New columns, canopy and the crown above them appeared in 1838. 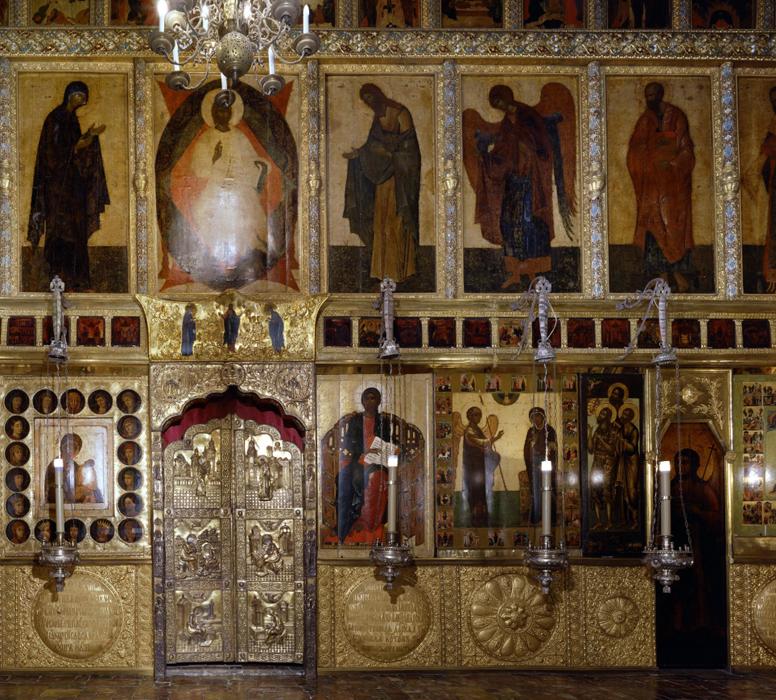 The new mount for the iconostasis was made in 1896 by the masters of a well-known jewellery firm of I.P. Khlebnikov at his factory in Moscow.

As a result of the competition offered by the Emperor, architect N.V. Sultanov was announced as the author of the project. The base of the iconostasis was made upon his drawings too. The engraving in a convex circle on the left edge tells that the drawings were made in 1894 on the order of Emperor Alexander III; the one on the right edge tells about completing the works on the iconostasis in 1896 on the order of Nicholas II. Two other circles in the centre include the text of the prayer to Our Lady and the Savior. The ornament on copper facings of the base stylizes the design of the 16th-17th centuries.

A magnificent multilayered frame consists of copper facing covered with enamel of cherry, white and light blue colours, transparent micaceous layer on it and a gilded mount made of brass with openwork chasing. 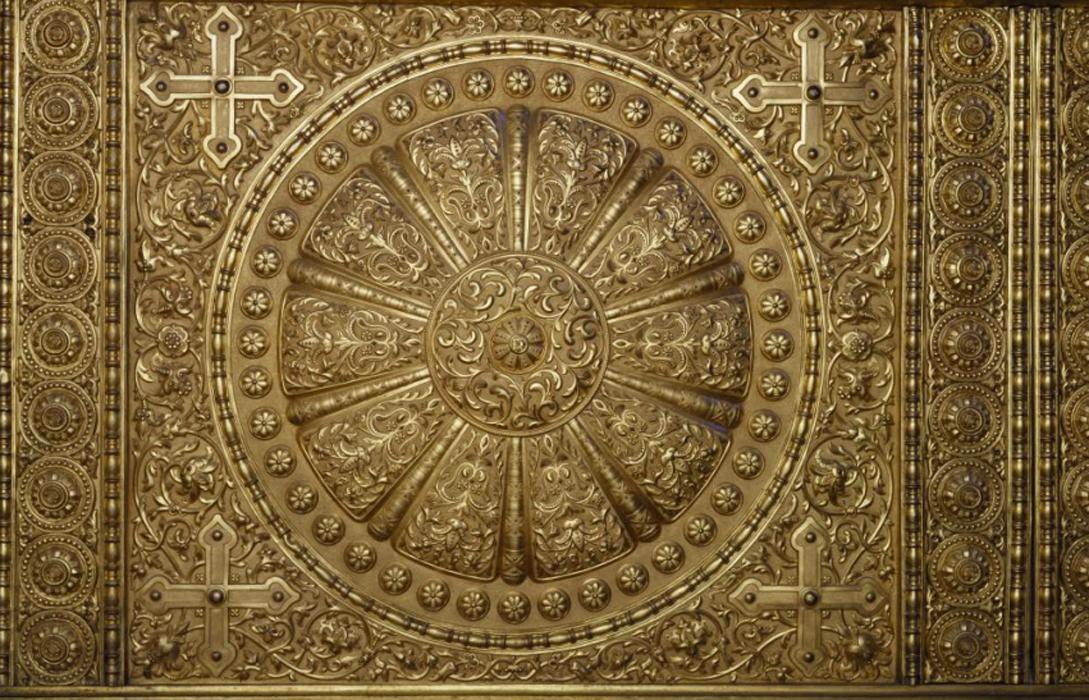 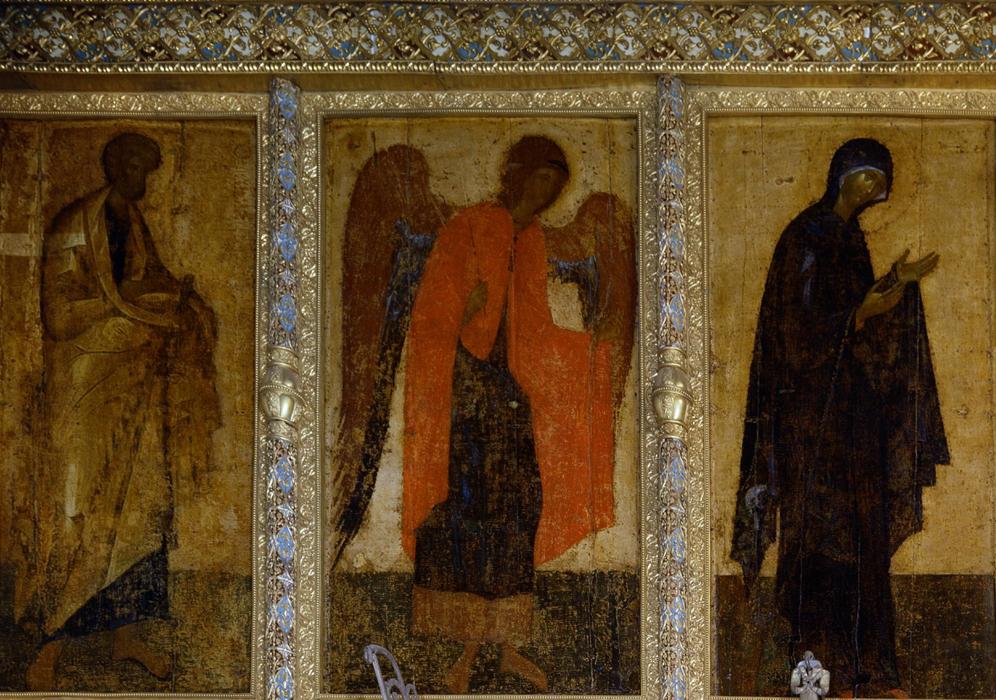