The Annunciation Cathedral was built by Russian masters on the former cathedral’s ground floor; its appearance combines features peculiar for both Moscow and Pskov architectural traditions. The present-day look with enclosed galleries and four aisles on their corners, its pyramidal silhouette with nine golden domes was formed in 1560s.

The walls of the cathedral are divided by lesenes and completed with spade-shaped arched gables, what is peculiar to the Old Russian architecture. Corbel arches at the base of the central dome repeat the rhythm of arched gables, and narrow slit-like windows are fitted into the blind arcade frieze.

Four small chapels were added to the exterior terrace in 1564-1566. As those additions upset the previous balance, it was decided to add two false domes too.

So the former design and idea of the monument was fundamentally changed. The Cathedral lost its symmetrical silhouette and balanced interior and appearance of a small Moscow church of the 15th century, but gained picturesque solemnity peculiar to the buildings of the time of Ivan the Terrible, showing the significance of the new presentation of the Moscow sovereign—‘the tsar of All Russia’. 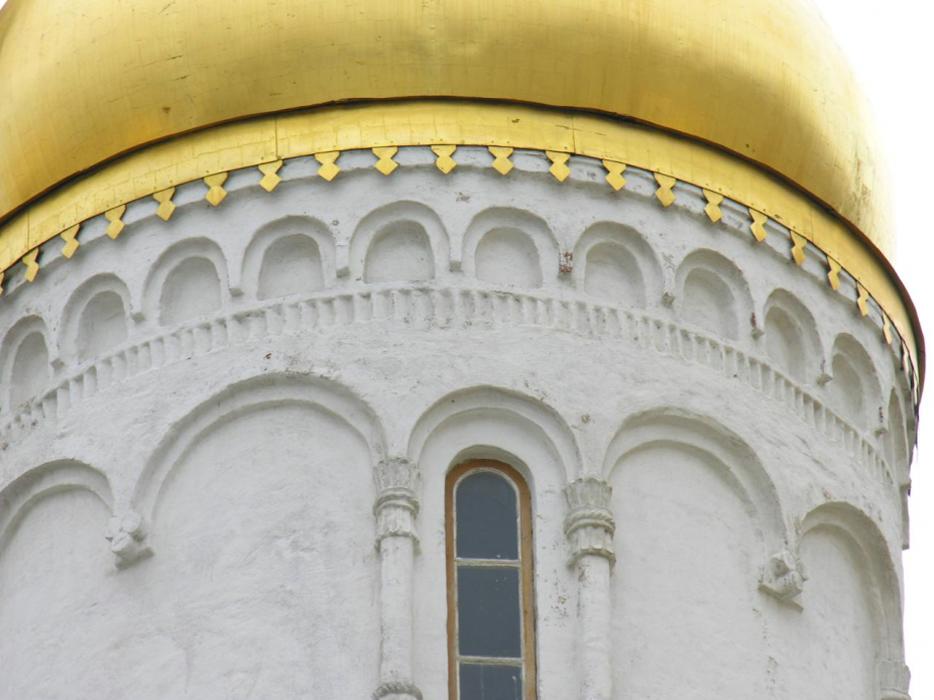 The cathedral is built on a high ground floor, a landmark of the late 14th century. It represents a square footprint under the central part of the building, made of large white blocks. It has a massive pillar in the center, connected to the walls by low arches. An apsis is fixed to it from the eastern side. It seems probable that the grand princely treasury was kept at the ground floor. From 1989, it houses an archaeological display related to the history of settlement and development of the Borovitsky Hill, with unique treasure found in the 19th-20th centuries on the Kremlin territory.

The Cathedral is surrounded by galleries from three sides. The architecture of the northern and western ceremonial galleries reflects features of the Italian Renaissance. It is overarched with beautifully shaped intersecting vaults; the pillars bearing them are decorated with panels and surmounted with carved white-stone chapiters, such chapiters usually adorn lesenes (pilaster strips) too. North and west galleries were used during ceremonial processions, as a passage for royal processions and orthodox guests of the tsar to the reception held at the Faceted Chamber.

The south gallery and non-extant east gallery were erected simultaneously in 1489. The south porch was a separate enclosed space. It seems probable that the side chapel of St Basil of Caesarea was transferred there from the Diaconicon in the mid 16th century. This side chapel was renewed in 1562-1564. These two galleries connected the cathedral with the palace and the Treasury House, where the property of the princes was stored. Building the porch from the east side, which was facing the Cathedral Square, was unusual for Russian architecture, as it was supposed that nothing could be added to the altar part. Later on, the east gallery was dismantled along with the treasury chambers adjoining the gallery. The tsars used the south porch as a passage from the square to the palace. The portal adorning the cathedral is typical of the Moscow architecture of the 15th century.

The southern porch has almost thoroughly lost its original appearance—the vaults were relayed, the western and eastern walls were reconstructed, the lesenes of the cathedral’s quadrangle were cut. Grand changes refer to 1836, when a side chapel of St Nicholas the Wonder-Worker, the patron saint of Emperor Nicholas I, was made in the gallery. Later it served as a room for embroidereresses and as a sacristy too. Just at that time the portal and lesenes were cut. The portal was rebuilt in 1949. It was constructed in the traditions of the old Moscow style—receding tires with alternating rectangle flanges and beaded semi-columns and sheaf-like capitals. The portal is completed with a spade-shaped arch. The perron enriched with carvings leads to that porch. The southern porch was closed down in 1550-1560.

The southern perron led to a small palace garden, which was uses as a passage to the Archangel Cathedral, a leisure area and a place for almsgiving. Only a carved white-stone portal, a window frame and a piece of a border on the wall of the 15th century have survived till nowadays. The southern porch was not likely to be painted all over, but it was adorned with carvings. Existent carved details, such as a window surround in its eastern part and a mid 15th century column, which was opened during the restoration of 1949, bear evidence to the richness and sophistication of the décor. The columns at the front steps were opened during the restoration of 1860s and replaced by copies. 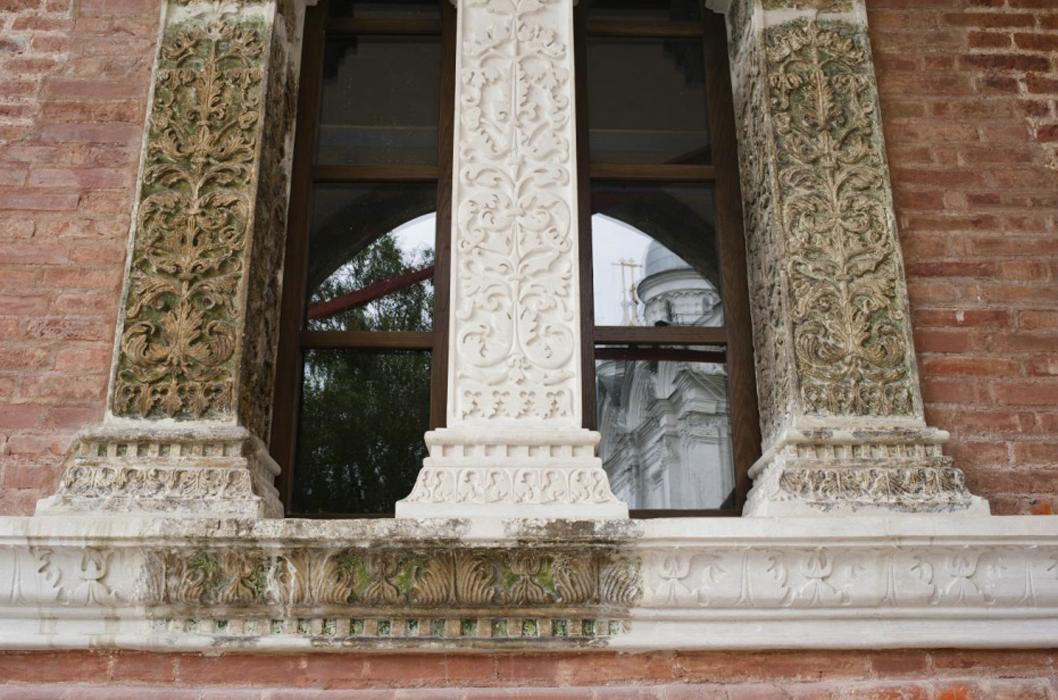 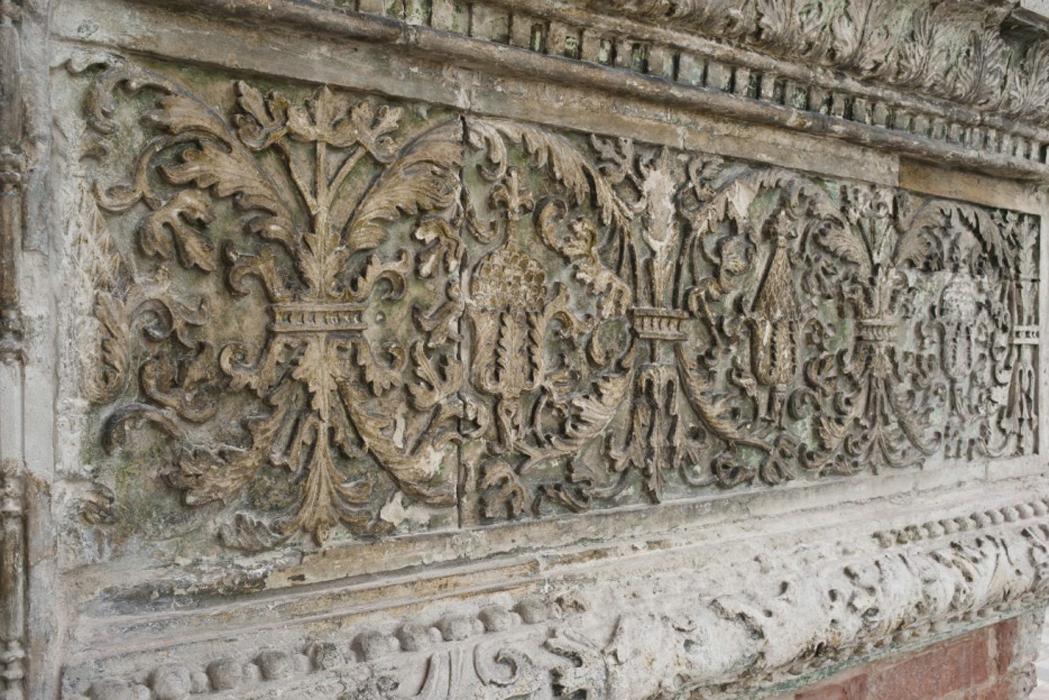