Illustrations of the Apocalypse, or the Book of Revelation, also called Revelation to John, were hardly ever encountered in a monumental painting of the 16th century. The Book of Revelation is one of the most ancient Evangelical books dating back to the 1st century A.D. By means of sacral symbols the murals reveal the history of mankind and the struggle between good and evil. Compositions of the scenes are connected with each other and create a specific pictorial space where dynamic motion and interaction of figures distinguish the painting from traditional representation of religious subject matter.

The most of the cathedral’s central part depict scenes of the Apocalypse. There are three main themes: events taking place in the sky, disasters on Earth and illustrations of the book’s last chapters about the struggle between good and evil and the final triumph of justice.

Scenes of events in the sky begin in the upper tier of the southern wall.

The space to the left of the windows and the wall separating the choir are occupied by scenes of the events taking place on Earth.

Only a small-scale fragment has remained on the northern and the southern walls. The western wall has lost a considerable part of its paintings due to reconstructions of the cathedral.

On the pictures depicting terrifying disasters number, seven is repeated several times: the Lamb of God opening the seven seals, the seven angels blowing the trumpets and the seven angels pouring out the vials of God’s wrath.

The southern part of the west wall illustrates the Apparition of the Angel Enshrouded in a Cloud before St John. The Angel gives the book of good and evil so that St John should eat it.

Compositions represented on the arches under the choir are distinguished for their complex design and concept. Scenes taken from different parts of the Apocalypse text are united by one theme— the struggle of good and evil. All those episodes organically combine with The Last Judgement traditionally depicted on the western wall under the choir.

The Last Judgement shown in the murals of the Annunciation Cathedral is a part of illustrations from the Apocalypse. On the northern part of the tier, the Forty Martyrs of Sebaste, the Seven Sleepers of Ephesus and the Three Young Men in the Fiery Furnace are painted. On the southern part—theProcession of the Righteous Men to the Gates of Heaven. On the western part—depictions of sinners and hell, where Satan sits solemnly with Judas’s soul in his arms; next to it—the composition Earth and Water Returning the Dead and the Ordeals—toils of sinners in hell. 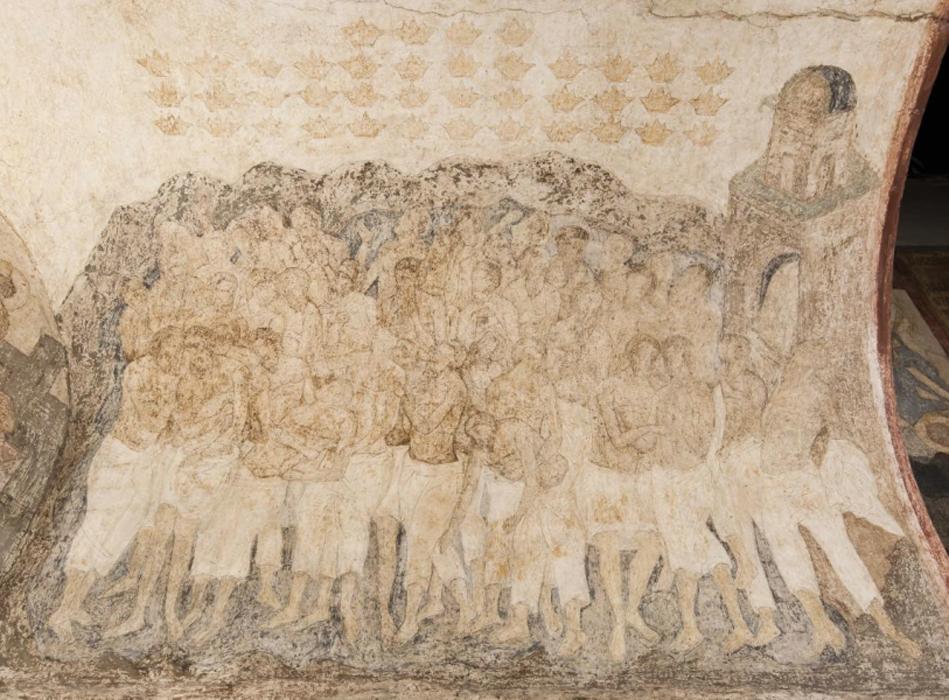 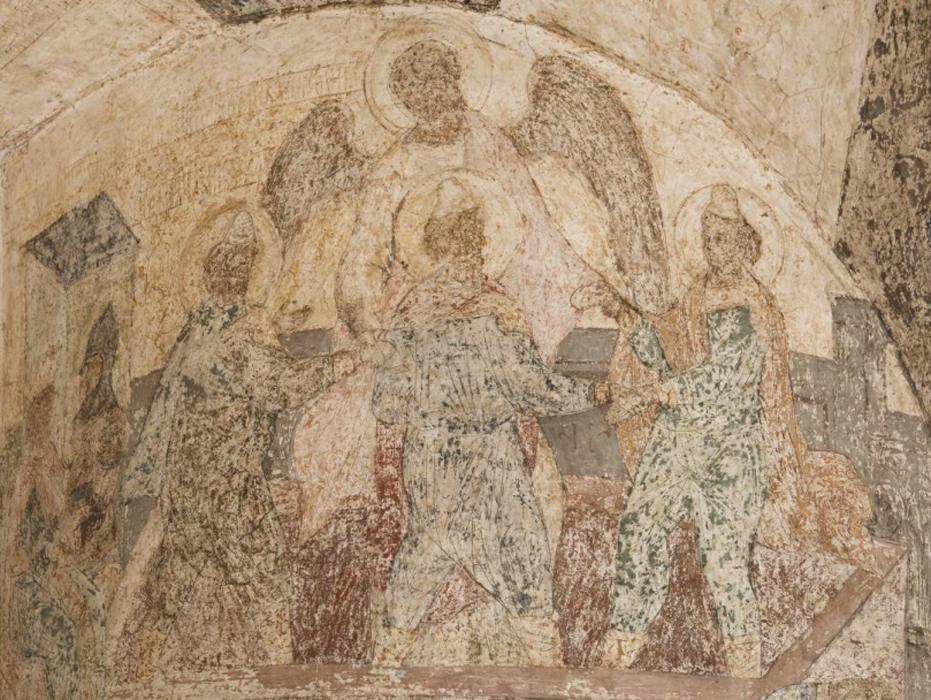 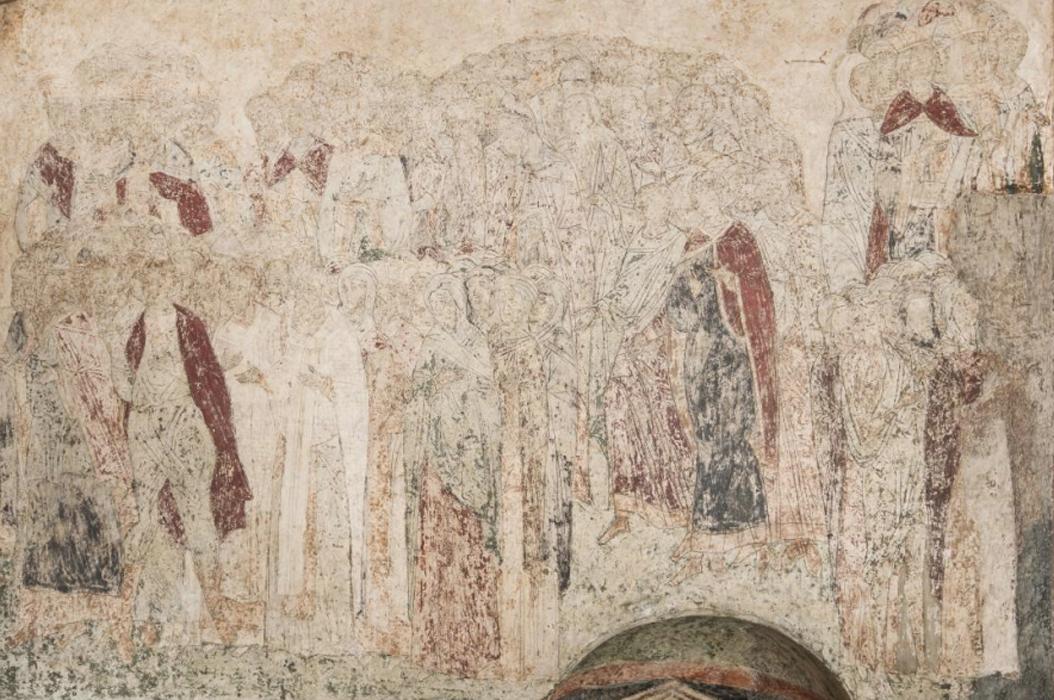 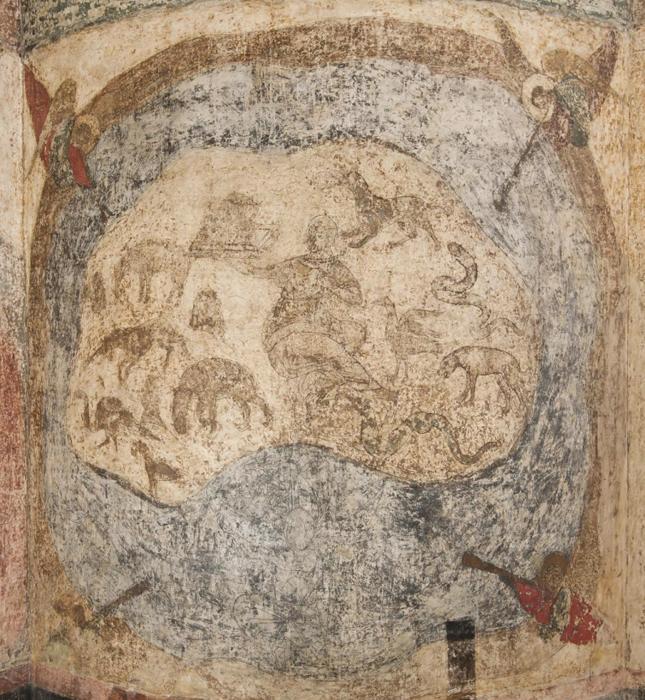