ANCIENT ICONS OF THE MAIN ICONOSTASIS

Ancient icons of the main cathedral’s iconostasis as well as those placed by the pillars now occupy five showcases of the exposition. Showcase one presents four large icons of the Deisis tier, viz icons of the Great Martyr Demetrius and the Great Martyr George, painted by Russian masters probably in the end of the 14th century, and icons of Simeon the Stylite and Daniel the Stylite painted in the mid 16th century and overpainted in the 17th century. Notwithstanding that they were created at different times, they compose a single ideological and iconographic piece with other icons of the Deisis tier of the main iconostasis.

During the next reconstruction in 1896, those icons were removed, as well as the icon of the feast tier The Proofing of the Apostle Thomas, traditionally dated mid 16th century. The history of the appearance of the icons with the images of the Stylites and the icon The Proofing of the Apostle Thomas is closely connected to the activity of Metropolitan Macarius and is significant for the understanding of cultural processes in Ivan the Terrible’s time. A separate showcase presents one of the well-known treatise icons of the mentioned time—The Crucifixion, with Border Scenes of the Passion of Christ.

Ancient iconostasis included small 'palm' icons, which were replaced by extant double-faced tablets in the very end of the 17th century. The menaion tier underwent changes more than once. The tier consisted of small devotional icons of the Royal family and the Annunciation Cathedral’s priests. Some of them were the reductions of most venerated ancient icons placed in the cathedral, including icons with the images of the Holy Virgin. The abundance of such icons was a distinctive feature of this cathedral in whole and its old menaion tier in particular. According to the inventory of the 17th century, it mainly comprised images of the Theotokos. Most ancient extant icons are: two icons of Eleusa type and a Greek icon Our Lady Hodegetria, belonging to the 14th-15th centuries; the Poemen Icon of Our Lady in silver cover and Our Lady Hodegetria,painted in the second half of the 16th century, and The Virgin Galaktotrophousa (the Milk-Giver) of the second half of the 16th - beginning of the 17th century. These images reflect special veneration of wonder-working icons of the Virgin, which were formerly kept in the Annunciation Cathedral. 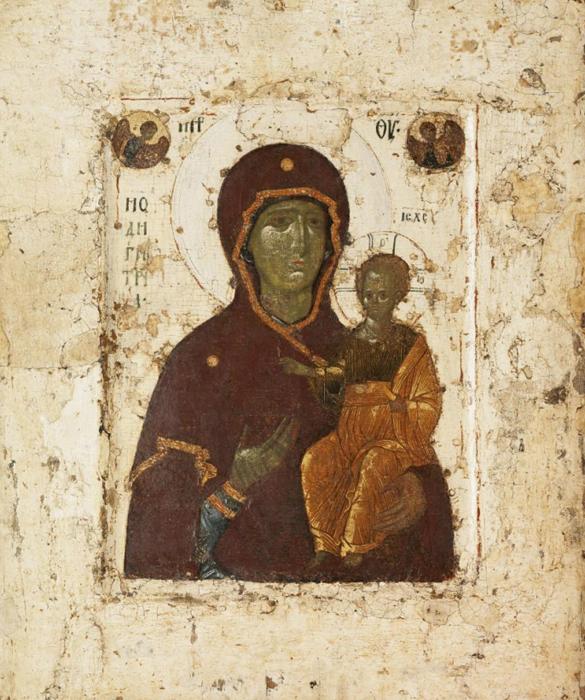